Hi, Jasel (JaselUmena#1443) here – this is my guide to the Arch Heretic class. After having a look at this guide you will have a better understanding of this class. I also actively participated in the rework for this class.

Arch Heretic is a STR-based cleric class and plays at a close to mid ranges – similar to classes like Lunar Knight or Adept. His playstyle revolves around his main damage skill [Devastation] and gathering bubbles while it is on cooldown, all while holding your ground, dodging or blocking incoming attacks and keeping track of your HP.

As of his most recent rework, Heretic can employ two different builds which are rooted in two different passives: [Arch Heretic A] and [Arch Heretic B]. Picking one or the other will influence your playstyle and affect which skills deal the most damage.

Both of these skills are viable – [Arch Heretic B]’s burst is great for nests, while [Arch Heretic A] gives consistent damage output.

[Divine Combo]: This is part of your [Class Mastery III] and you will be using it often. If you need to dump SP somewhere, this is the place.

[Dash]: In most cases, you will take and max it. Unlike other classes, however, it’s not a must have for heretic because of [Cruel Rush].

[Dive Kick]: Used to be useless, but now it can be used to cancel the end lag on your ultimate, so it’s a legit option.

[Execute]: The usual +20% damage taken debuff that only works when transformed. Leave it at level 1 – its damage and frequency of use are too low, and your SP budget is very tight.

[Evil Hand]: The usual +20% element defense down debuff. Left clicking after this skill will either auto-use [Carnage] or [Savage Attack] if it is off cooldown. It has high super armor, which you can use to go through stuff that would otherwise stagger you. Its very small leap can be used to jump over stomps, too.

[Carnage]: Your filler skill which triggers via left click after the majority of your skills. Its not a strong skill but grants you quick and reliable bubble generation.

[Savage Attack]: A mini-nuke that deals very good damage in a very short timespan. However, it can not be used on its own due to its insane start-up lag – use after [Evil Hand] via left click for the best results and to cancel the start-up lag.

[Devastation]: No matter your build, this skill will be on top of your damage spread. It has a large AoE and it can hit slightly behind you – to your right and left (the X shape on the ground is a good indicator of how far it reaches; even if only the very tip of the X's touches an enemy, it will do its full 3 hits of damage). Keep in mind that it has a blind spot in the centre towards the far edge of the skill, which means you should either use it from a close range or angle it so that it lines up with your enemy.

[Death Gate]: This skill's entire animation is iframed, which allows you to completely ignore certain mechanics like Red Dragon Nest Guardian's Rings. It deals slightly higher damage than [Devastation]. With a relatively short cooldown (I find this ideal to time Balapa's Absorb), its only downside is its end lag which can be canceled with [Dive Kick].

[Soul Steal]: It’s a great self heal (almost as good as Impactor’s) – with the requirement that you must hit something with a health bar. This includes minions, flame statues, pillars, ice crystals and a.. vague et-cetera. Despite the implication that inanimate objects may have souls, it is a 11% heal (at max level) with a 12s cooldown, further boosted by your base class buff and the Tree of Life jade (if you choose to use it).

[Evil Stain]: Small passive bubble generation. It stops your bubbles from decaying and it’s a requirement to learn.

[Pain to Gain]: Long cooldown (60s), but a worthwhile self buff that grants you 30 seconds with 20% more damage, 20% more action speed and practically no cooldown on your [Tumble]. It costs 25% of your own HP, but you’ve got your self-heals for that, and you probably have a healer in your party.

[Land Corruption]: Ground AoE that grants you minor life-steal (up to 0.2% hp per hit at max level) and 15% action speed (at all levels). Positioning it correctly is very important – standing on it will grant you 5 seconds of the buff and it will refresh for as long as you stay in the AoE. This means you can technically get out of the area and come back later without a huge impact to your DPS, as long as your trips take less than 5 seconds. Note that even if the life-steal seems small, it adds up with all the multi-hitting skills you have.

[Shield Smash] and [Shielded Smash]: A pre-requirement for [Chaos Shield] – the difference between them is preference, so pick the one you like more.

[Chaos Shield]: Fire and forget – it’s a projectile that creates a S U C C area of effect and will generate bubbles per hit. This can keep ice crystals and flame statues in place even if bosses are trying to pull them in. It hits twice as many times if maxed out, making for a great bubble generation tool if you struggle with this aspect of the class, but this is a huge SP investment.

[Cruel Rush]: It’s a dash that deals damage and gives you a bubble for each dashing cycle. If you did not learn [Dash], this skill will replace it, giving you +200 movement speed (if transformed) just like [Dash], but at the cost of only 3 SP as opposed to 5. It has the potential to be used as a filler skill at max level, but it’s more of a meme than anything else.

[Cruel Slash]: You become a spinning beyblade for four seconds, repeating a series of three hits in an area around you while your character moves towards the direction of your camera. It generates bubbles per hit, and at max level deals a lot more damage than [Carnage], so it acts as a great filler whenever it is off cooldown. It is a bit harder to fit in the rotation for [Arch Heretic A] users, but once you figure it out, it’s worth it.

[Guilt Attack]: This allows you to chain your [Tumble] into [Carnage] by pressing left click. Notice that under the effects of [Pain to Gain], the reduced cooldown of this skill will sync with your [Tumble].

[Flaming Revenant]: Mostly a PvP skill – it allows you to get out of a staggered hitstate. It’s not necessary, but you can take it if you really want to. Just keep in mind that your SP budget may be better spent elsewhere.

[Deadly Blow]: Can be used for DPS or as an iframe. Using it off cooldown or with max bubbles doesn’t matter, which means you have 15 seconds where you can save this skill without losing out on DPS (if you are not cap FD, using this skill at max bubbles does the most damage).

Max everything on this tree.

[Arch Heretic]: Permanent transformation that you should always max out. It also converts a % of your strength to attack power.

[Sawblade]: A multihit projectile – cast only via [Divine Combo] left click. If your ping is high, this skill can miss or go through enemies. Keep in mind that this skill is not a nightmare skill even when transformed.

[Class Mastery II]: Every second you spend without hitting anything with [Deadly Blow] increases its burst damage – up to 600%. If you have cap FD, use it whenever you want. If not, using it at max bubbles will give you the most DPS.

[Class Mastery III]: [Divine Combo] becomes stronger and you can left click after it to shoot [Sawblade] without it being a death sentence for you. Right clicking will cast multi-hit lightning. This has a low priority in your rotation.

[Power Accelerator A]: This makes [Land Corruption] boost your super armor so that you can’t get knocked down while you hold position. It is not a bad skill, but what you give away in damage may be too valuable to justify its utility.

[Power Accelerator B]: +15% dark attack – this will always be a better choice for DPS.

[Attack Accelerator B]: +5% additional damage on crits. This is better for [Arch Heretic B] users. It boosts all of your skills, including [Sawblade] and [Deadly Blow]. Don’t be fooled by the fact it’s only a 5%, as it is a powerful extra multiplier.

[Enhanced Brutal Soul]: Generates bubbles every 1.5s. Take it if you are confident in your bubble generation and don’t want [Enhanced Pain to Gain].

[Enhanced Pain to Gain]: Gives you 40 bubbles on cast (essentially also guaranteeing another [Devastation]. The downside is that you can’t save [Pain to Gain], or you will lose DPS (exceptions apply on buff wiping mechanics) so you may not have that bubble burst when needed.

[Arch Heretic A]: As explained earlier, it is a playstyle that focuses on [Devastation] spam off a 5s cooldown. The major focus here is to gain at least 6 bubbles per second. Good for consistent DPS in raids such as IDN.

[Arch Heretic B]: +10% damage to all skills, regardless if they are nightmare or not. It reduces bubble gain to 3.75 per second, which means you can almost gain half of your bubbles passively. This is good for burst DPS.

This entire class’ gameplay revolves around bubble collection and usage (as many other classes do). It's a lot easier than it may appear at first – Heretic’s bubble gauge stacks up to 100, and these are all the skills that influence your bubble count:

Heretic’s second bubble system builds up over time and can be spent with [Deadly Blow]. It’s nowhere near as important, but its impact in gameplay and DPS check cannot be ignored.

[Sawblade DMG]: Its cooldown is perfectly in sync with x2 [Divine Combo], so messing with it will do you no good (unless you also equip a cooldown plate for [Divine Combo]). This is roughly second or third in your skill spread depending on your passives and how much it misses. Consider plating this skill, especially with [Arch Heretic B] and if your ping is good.

[Chaos Shield CDR]: Useful to get bubbles back faster, nothing else. Use if you feel your bubble game needs a boost.

[Land Corruption CDR]: Sometimes, it is difficult to keep up when your downtime is 15 seconds, and the plate will also help you mitigate the impact of misplacing your [Land Corruption].

[Death’s Gate CDR]: You can get its cooldown as low as 81 seconds with supports. (You can then use it as a timer for some mechanics – for example, if your ultimate is no longer off cooldown, Balapa is about to absorb!)

[Deadly Blow CDR]: Damage does nothing for this skill, and having a 5 seconds cooldown iframe is excellent. Works especially well with [Arch Heretic A] due to how it syncs with the cooldown of [Devastation].

[Block CDR]: It’s a crutch that can help you learn the class, but you really should think about replacing it as soon as you learn how to dodge.

This skeleton build leaves you with 18 leftover SP after maxing the Arch Heretic tree. You will have to distribute them between utility and self healing skills, which shouldn’t necessarily impact your DPS in a negative manner. Do also remember that you can switch your build in case you are going to a nest and you don’t have a healer.

Additionally, [Dash] is taken in this build as it may feel weird to not [Dash] normally if you are coming from another class – it is not necessary though.

As both A and B are viable, it is up to you do decide on if you want the A or B versions of these skills. 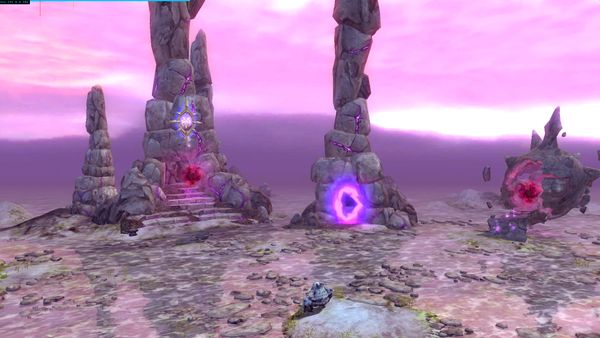 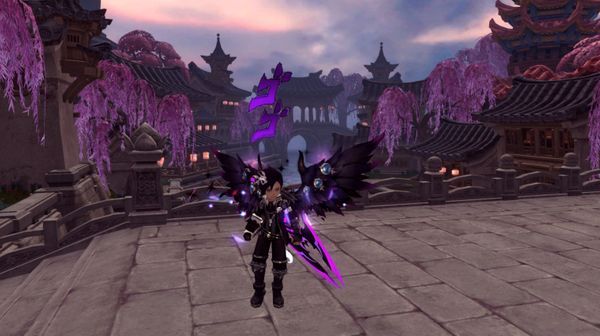